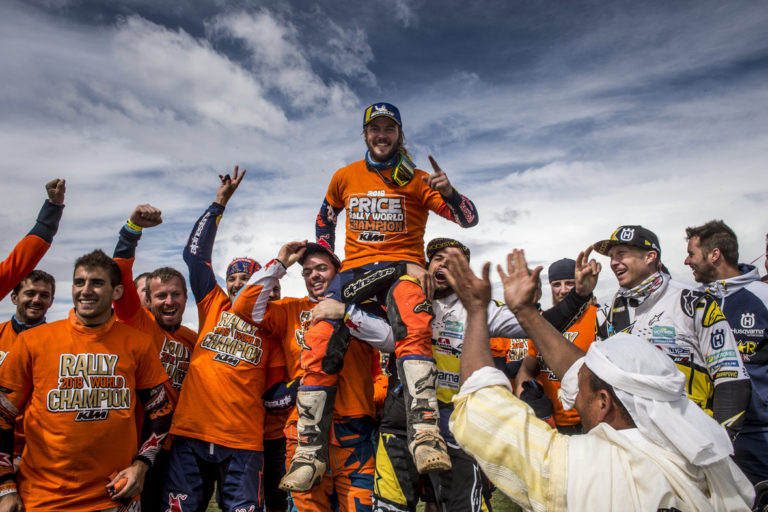 After five days of intense racing and more than 1,250 kilometres of special stages, Toby Price (KTM) could hardly believe that he had not only won the last race of the season but he had also been crowned FIM Cross-Country Rallies World Champion.

In the quad category, Aleksandr Maksimov (Yamaha) managed to come through to take the FIM Quad Cross-Country World Championship, despite a number of difficulties. The title of FIM Junior Cross-Country champion returns to Maciej Giemza (KTM Orlen).

Wind and clouds greeted riders at the finish of the Rally of Morocco, the stage finish located a few kilometres from Ifrane at around 2,000 metres above sea level. But the chilly weather did not dampen the festive mood of the riders who crossed the finish line.

Toby Price (KTM) opened the road on the two stages that were held on the last day and won the rally and the FIM world title. “It’s been a long time since I won,” said the amicable Australian.

“If I had been told in Abu Dhabi that I would win the title of World Champion, I would have laughed. I had landed heavily jumping a broken dune and was suffering terribly with my back. It was not the best way to start the championship. I often came close to winning, but this time I had the Baraka and it feels really good!”

Second-placed Matthias Walkner (KTM) loved the new format of the Rally of Morcoco organised by David Castera. “I really appreciated all the stages,” said the Austrian. “They were a mixture of pebbles, sand, dunes and difficult navigation. The road book was well done and accurate. Finishing second on the podium gives me confidence for the races to come…”

American rider Ricky Brabec (Honda) finished in third place and he enjoyed the Rally of Morocco. “The terrain looks a bit like California,” he said. “And the road book was well laid out. The race was hard and we went from the extreme heat of the desert to the cold and the rain, but I’m happy to be at the finish.”

After a good start to the season, Pablo Quintanilla (Husqvarna) had to cede the status of number one to his friend Toby Price. The sporting and smiling runner-up said: “I am second in the championship. It is a beautiful place and I’m happy because I finished every race on the podium…except here! The last few months have been very intense. We ran four races and my team did a great job, so I thank them for that.”

While a group of Moroccan musicians lit up the atmosphere in the Berber tent, all the riders reflected on the race and spared a thought for the Argentinian duo of Kevin Benavides (Honda) – who retired on the first day with thigh bruising – and Franco Caimi (Yamaha), who was less fortunate and fractured his right femur on the fourth stage.

There was no luck either for Xavier de Soultrait (Yamaha), who had a mechanical problem in the last stage and Adrien Van Beveren (Yamaha), who fell in the final kilometres and still finished sixth overall.

“I had to find a stake to make a splint,” said the Russian. “Then I had to ride the 350km standing.” Turning to Rafal Sonik (Yamaha), he continued: “I warmly thank Rafal because he helped me yesterday and, without him, I would not have finished the race. As for the title, I don’t know what to say..I don’t know what I feel…”

After a very good season, the Junior title returned to Maciej Giemza (KTM Orlen). “I congratulate Toby for his achievement. He is the fastest rider at the moment. To become like him, I will have to train a little more,” the Pole said with a smile.