You are here: Home / News / Champions Crowned on Final Day of 2018 KTM AJMX
Back

The Championship decider day of the KTM Australian Junior Motocross Championship (AJMX) in Penguin, Tasmania saw plenty of thrills and spills as 13 national titles were decided in what was an incredible day of racing.

The Coastal Motocross Club has been blessed with exceptional weather and conditions all week and the track has produced top notch racing. It has been a proud week for the sport, as the country’s elite junior motocross athletes were crowned!

Junior Lites 15yo – Final 4 & 5
Western Australian, Regan Duffy continued his charge towards the Junior Lites title with another impressive victory in final 4 to open the day’s action. The win was no doubt an impressive feat after a huge crash yesterday. Duffy charged to victory beating rival Noah Ferguson (QLD) with a confidence boosting five second win. Tye Jones (QLD) took third, while Dante Hyam (NSW) and Lochie Smith (TAS) closed out the fast five. The crowd would have to wait till the final moto of the day to see who would be crowned champion for this class.

Duffy later rose to the occasion and won the Junior Lites 15yo Championship after the final moto of the day. His performances in this category were nothing short of stellar, falling one win short of a clean sweep. He managed to take victory by 4.797 seconds, in front of Jones. Ferguson, Hyam and Smith all managed top five positions. 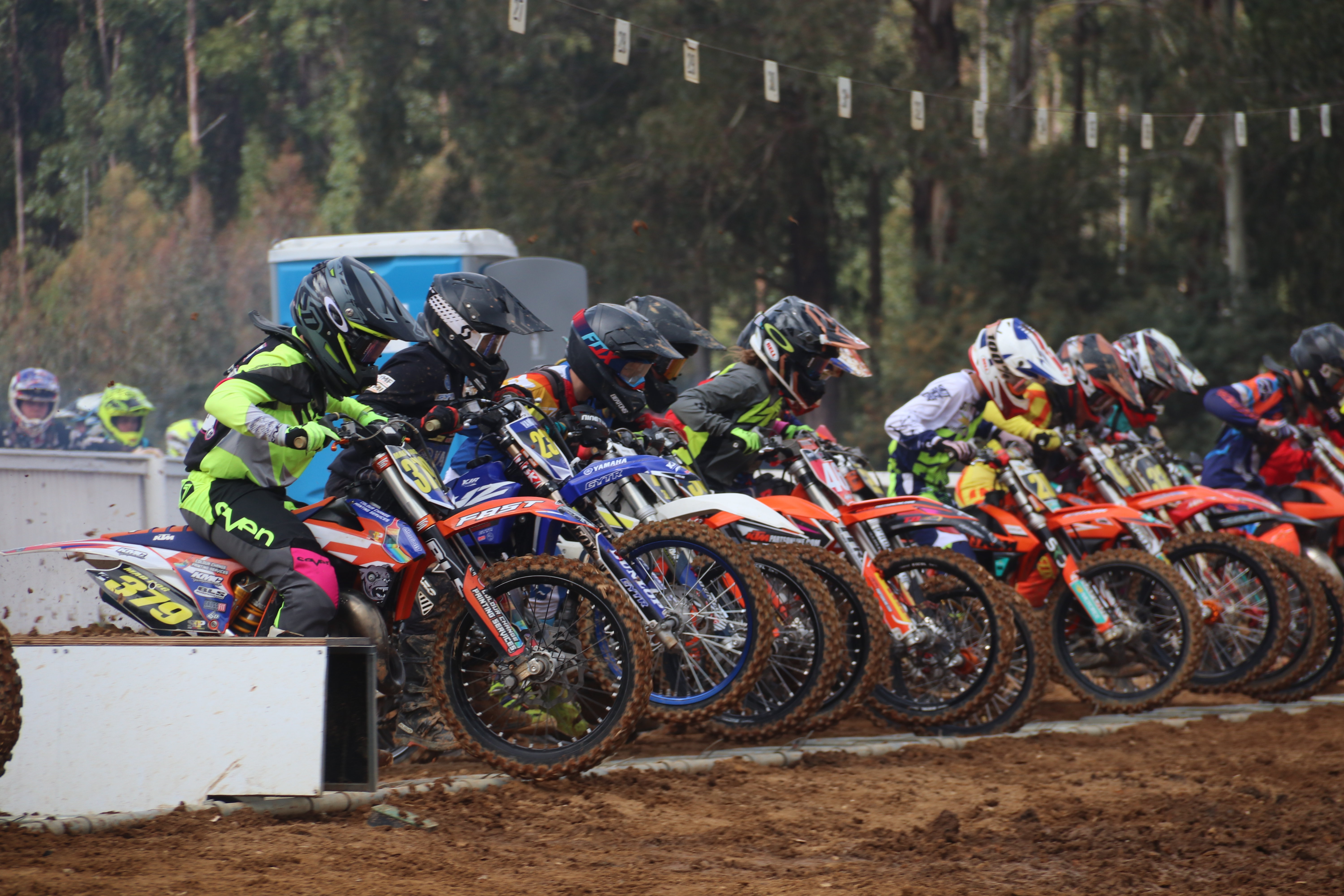 125cc – 13-U15 – Final 5
The first 2018 AJMX Champion of the day was crowned as South Australian, Alex Larwood sealed the title with a third-place finish. Levi Rogers (QLD) took a seven second margin win and would fall short of the championship by only one point to Larwood. Coming in second was Ricky Chalmers (NSW) followed by the new champ in third. Blake Hollis (NSW) and Dominic Walker (VIC) completed the top five finishers.

Mini Lites SW 9-U12 Final 3
KTM rider, Jet Alsop from Queensland has dominated the class to take the Championship for the Mini Lites SW 9-U12. Alsop taking two out of three final wins to seal the title. In the third final, Alsop managed to hit the front early on and control the race to the finish, despite coming under pressure from second place finisher, Jake Cannon (QLD0 at times. Finishing in third was Byron Dennis (NSW), with Angus Pearce (TAS) and Kayd Kingsford (NSW) in fourth and fifth. 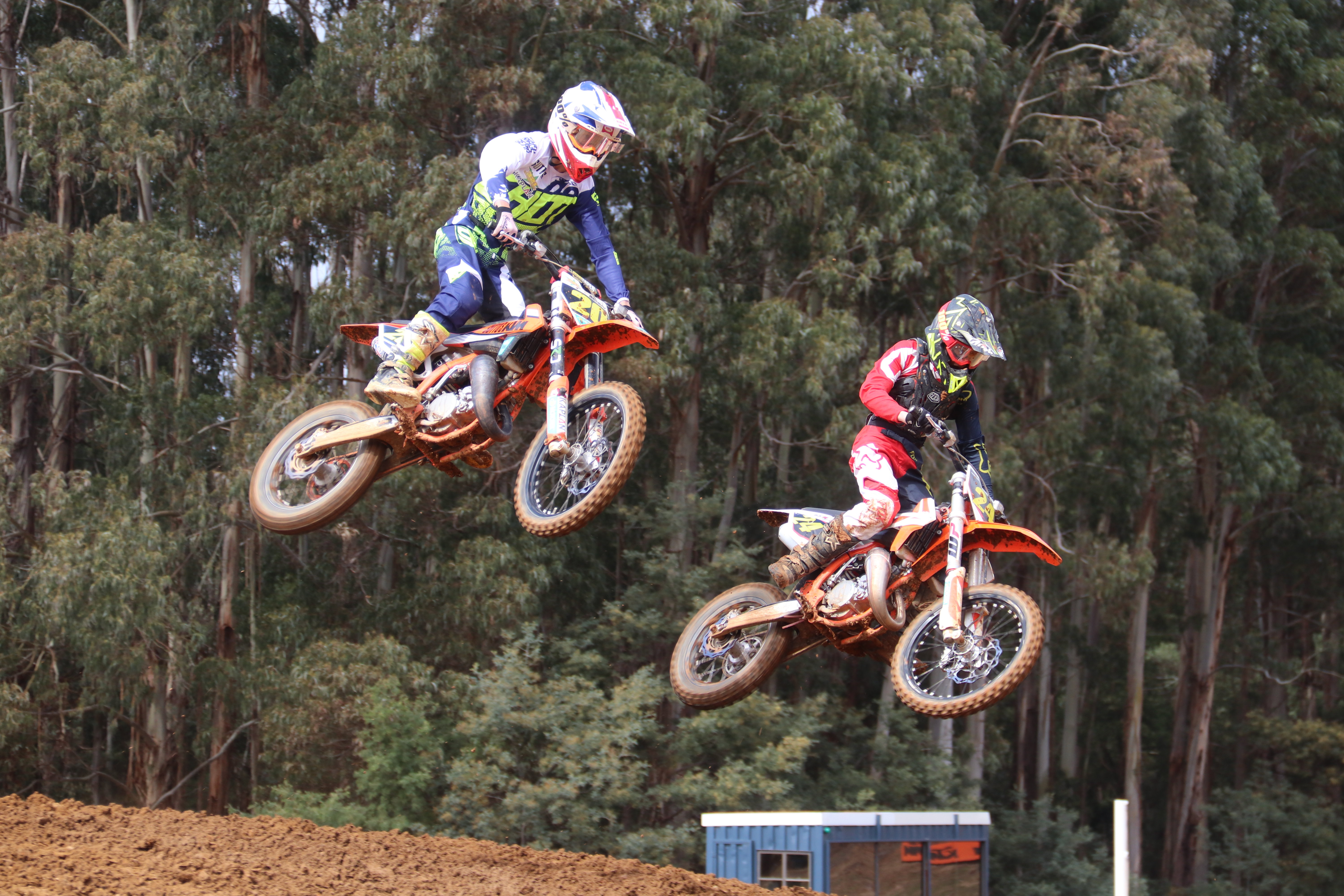 50cc Division 2 – 7-U9 Final 5
Brodie Court (QLD) has taken a sensational victory in the final moto of the 50cc class to earn himself a championship win. Court scored the same amount of points as Aden Oakland (QLD) but his victory in the final race, handed him the championship win. Oakland could only manage a 11th place finish in final 5. Finishing second was Phoenix Blanchette (NSW), followed by Ryder Creeke (NSW), Jay Jennings (TAS) and Ryder Woodrow (SA) completing the top five.

Mini Lites BW – 12-U14 – Final 3
The championship battle for the Mini Lites BW – 12-U14 could not have been any closer, with the top three all tied on points! Ryan Alexanderson (QLD) was awarded the championship for taking the victory in the final race, with Jackson Camilleri (QLD) and Rory Fairbrother (NSW) just missing out on the title, despite all being tied on 87 points. In the final Alexanderson took a five second victory ahead of Camilleri, followed by Brock Sleader (QLD) in third, Deegan Mancinelli (QLD) in fourth and Cobie Bourke (NZ) in fifth. 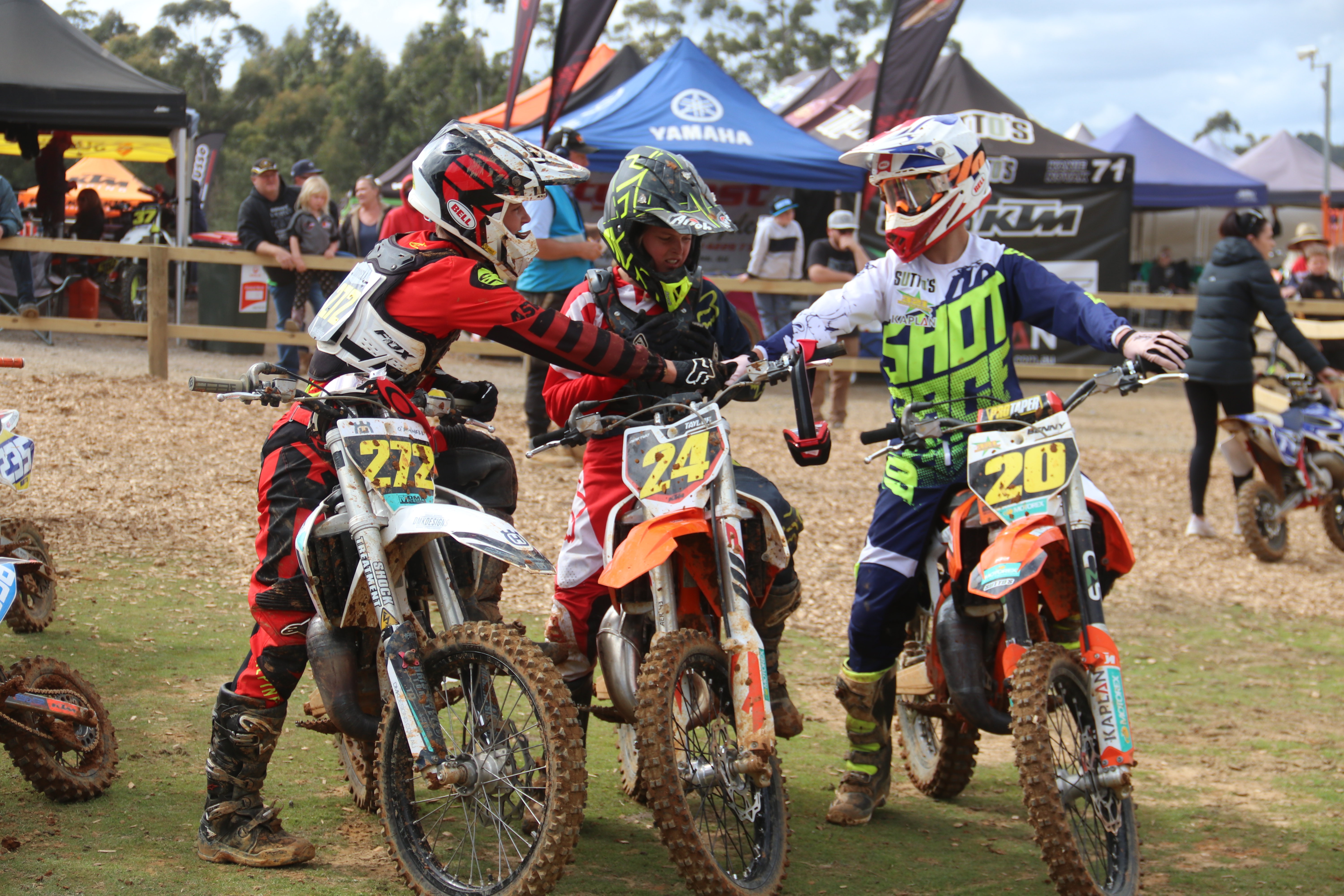 65cc 7-U9 – Final 5
Cooper Ford (TAS) was Mr. Consistency here at the 2018 AJMX, being crowned 65cc 7-U9 – Final 5 Champion, despite not taking a win. His second place in the final moto being enough to take the title. The race itself was won by Cooper Downing (QLD), who beat home Ryder Creeke (NSW), Ford, Jack Burton (NSW) and Peter Wolfe (QLD), in what was a respectable display.

Junior Lites – 13-U16 Girls – Final 5
Queenslander, Charli Cannon has dominated the final moto to take the Junior Lites – 13-U16 Girls Championship in fine style. The 175 points Cannon clocked up was more than enough to seal the deal and she won the final race by over 18 seconds. Cannon was followed by Taylah McCutcheon, Tanesha Harnett, Taylor Thompson and Madi Healey in the final race.

65cc – 11-U12 – Final 5
Jet Alsop (QLD) has taken another championship here at Penguin in the 65cc – 11-U12 category. His third in the final moto was enough to guarantee the title. Jake Cannon (QLD) managed to win the final race but he would fall only four points short off Alsop in the title race. Seth Burchell (NSW) finished second, followed by Alsop, Callum Penney (TAS) and Tate Young (TAS). 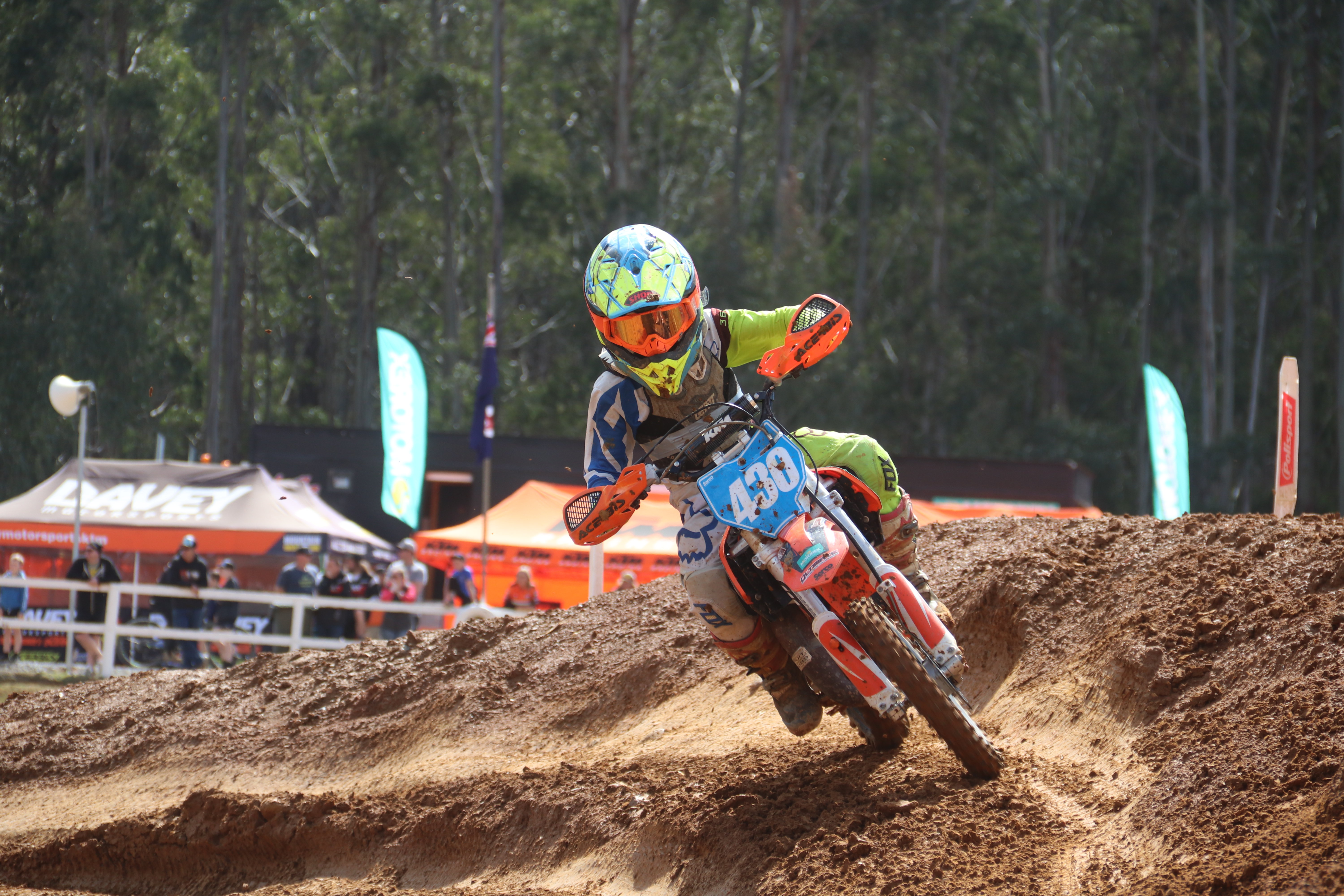 125cc – 15yo – Final 5
Noah Ferguson (QLD) has sealed the 125cc – 15yo championship, despite only fifth in the final moto and not winning a final. There was plenty of drama including, Regan Duffy (WA) retiring from the race. Eventually it was Corben Weinert (WA) who took a dominant 19-second margin victory. Weinert was followed by Lochie Smith (TAS), Kai Newbold (SA), Tye Jones (QLD) and Noah Ferguson (QLD).

Junior Lites – 13-U15 – Final 5
Taking his second championship of the day was Alex Larwood (SA), this time in the Junior Lites – 13-U15. Larwood took the championship in style, also taking the victory in the final moto. His 169 points giving him a 28-point buffer over Blake Hollis. New South Weshman, Hollis pulled through for second in the race ahead of Kipp Adams (VIC), Benny Novak (NSW) and Ricky Chalmers (NSW).

65cc 9-U11 – Final 5
A race victory in final five awarded the Championship to Kayden Minear (WA) who put on an impressive display to win by 13 seconds. He managed to edge out Koby Hantis (NSW) in second. Kayd Kingsford (NSW) scored another podium in third, followed by Ky Woods (NSW) and Jake Sanderson (VIC).

Mini Lites BW 12-U16 Girls – Final 5
Taylah McCutcheon from Queensland made it a clean sweep in the Mini Lites BW 12-U16 Girls to grasp the title, completing the week with a dominant 25-second victory. Charli Cannon (QLD) pulled through for another consistent runner-up placing ahead of Taylor Thompson (NSW), Tanesha Harnett (NSW) and Jessica Robertson (VIC). Cannon was second in the title hunt after a string of top results. 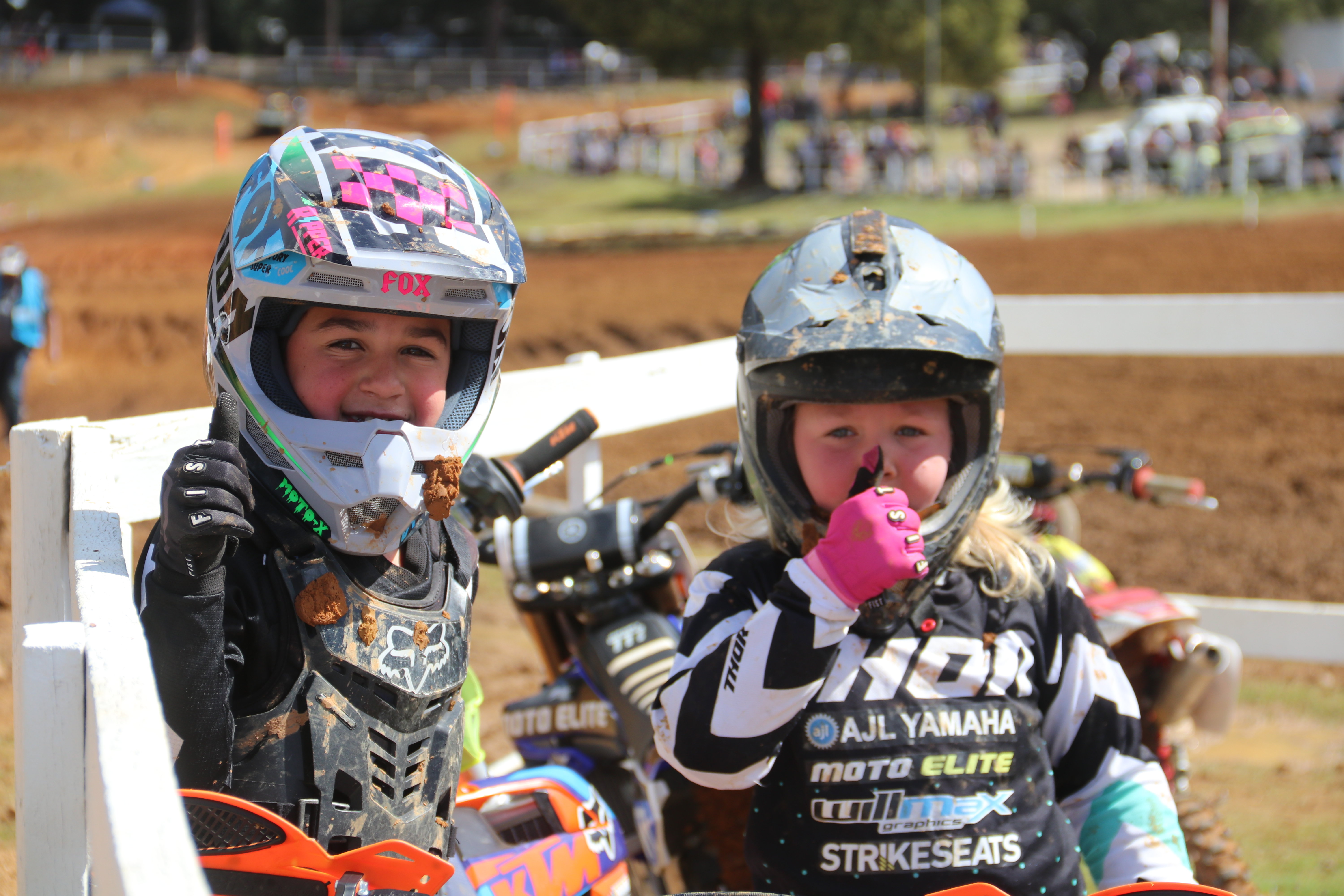 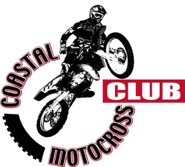