You are here: Home / Motocross / Australia Rides to Fourth Overall at MXoN
Back

Team Australia have scored a massive result at the 72nd MXoN at Redbud, USA, managing to take fourth overall against the world’s elite Motocross riders. Claiming victory overall was France who have dominated the sport in recent years. Australia’s result is a proud moment for our nation and the team have once again put on a brilliant display on the world stage.

Although it was disappointing to just miss out on a podium finish, the Aussies were no doubt happy with their results. Hunter Lawrence (MX2) once again shone on the world stage and proved to be Australia’s best rider. He managed to lodge a second-place finish in Race 2, as well as an eighth-place rostrum in Race 1. Lawrence’s performance putting Australia right towards the pointy end. Right from qualifying, Lawrence positioned himself as a massive threat

Mitch Evans (Open) also chalked up great results with 10th and 14th place finishes. Kirk Gibbs in the MXGP class would suffer unfortunate luck but still registered 14th and 33rd and provided a valued contribution to the overall team result.

The glory had to go to France however, their consistency was simply unmatchable and they were rewarded with the overall championship. This is the fifth time they have risen to take the overall nations championship. They were a whole two points clear of Italy in second and the 6 ahead of the Netherlands.

Quite incredibly, Australia and Great Britain were both tied on 48 points but the Aussies took fourth position due to count back. The hometown favorite USA encountered a disappointing result, only managing sixth on home soil.

Motorcycling Australia is ecstatic about the result of the Aussie riders and would like to thank them for their efforts on the world stage. MA would also like to thank Team Manager Michael Byrne, Assistant Gary Benn and all of the riders, mechanics and offical team support, RACESAFE and Moto Outlet.

MA’s CEO Peter Doyle commented; “This is an excellent result by the Australian MXoN Team to register a fourth place overall, their best finish since 2011. Considering how young and inexperienced the team is, we couldn’t be more proud of their performances. They carried themselves with pride on the world stage and we couldn’t be more excited about the future potential of this team.” 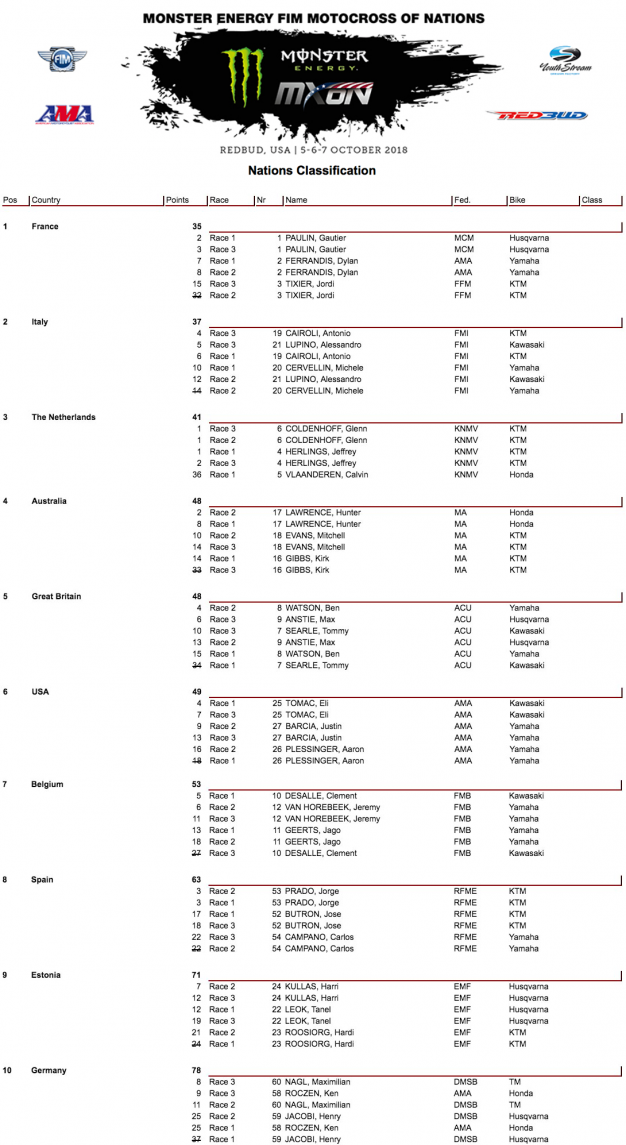